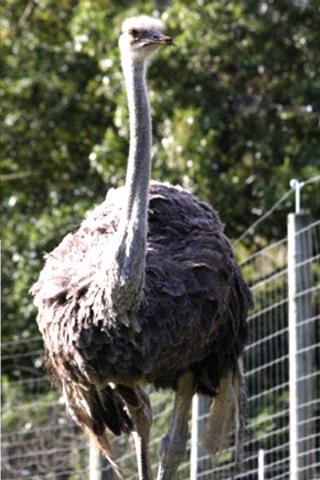 Mainly feed on seeds, shrubs, grass, fruit and flowers, occasionally they eat insects. Ostriches have no teeth and swallow grit and small stones to grind up their food and aid digestion.

Breeding is March to September and they lay simple shallow nest scrapes in the ground made by the male. Nests are communal and the major hen will lay 12-15 eggs which are incubated for 35-45 days. Chicks have a low survival rate, on average one per nest surviving to adulthood.

Ostrich are flightless birds like emu and kiwi. It is distinctive in its appearance, with a long neck and legs. Their eyesight is excellent and their hearing acute.

When threatened, ostriches run away. They have been known to reach speeds in excess of 70 km/h and can maintain a steady speed of 50km/h, which makes the Ostrich the world's fastest two-legged animal. They can cause serious injury and death, with kicks from their powerful legs and can also easily cause death through slamming their heads into opponents.

Ostrich eggs are the largest of all eggs. On average they weigh 1.4 kg, over 20 times the weight of a chicken egg.