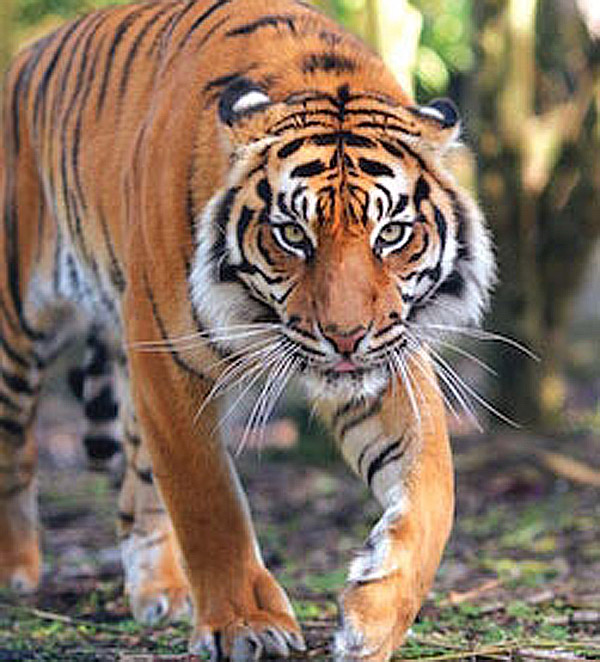 The stripes on the tiger provide camouflage so that it can stalk or lie in ambush for its prey without being seen.


During the hot season tigers spend much of the day resting near streams and water pools, often lying or standing in water to keep cool.


Wild populations in Sumatra are protected and captive zoo populations are managed in an attempt to prevent this subspecies following the Bali and Javan tigers; these subspecies became extinct in the 1940s and 1980s respectively.


The Sumatran tiger is the smallest subspecies, the Siberian the largest. It is estimated there are around 400-500 Sumatran tigers surviving in the wild.

There are five sumatran tigers at Hamilton Zoo. Oz and Kembali are the males and Mencari, Sali and Kirana are the girls.


Kembali and Kirana are the son and daughter of Oz and Sali. The cubs were born 16 November 2014 and a naming competition was held following this to find appropriate names for the pair. The two names relate the their native habitat or Sumatra and were selected from over 800 entries. Kembali means 'return' or 'come back' and Kirana means 'beautiful ray of light'.


Dad Oz came to Hamilton Zoo from Auckland Zoo at the end of 2013 specificially to breed with mother Sali. Kembali and Kirana can usually be found in the main tiger enclosure with mum Sali. Oz and Mencari are often together in the smaller tiger enclosure.