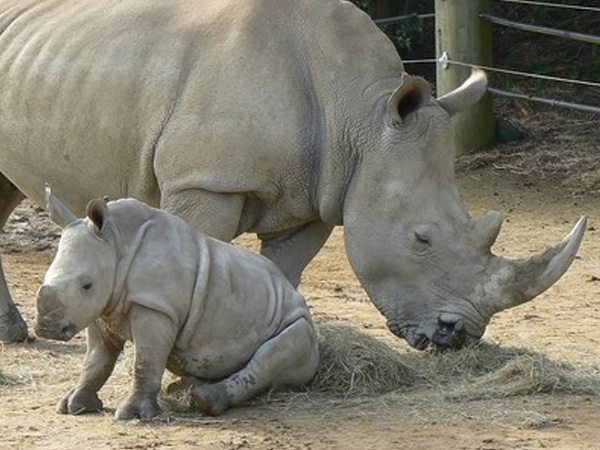 Grasses and other vegetations

50 years in the wild, longer in captivity

There are three Asian species of rhinos – Sumatran, Javan (critically endangered) and Indian (vulnerable). Once found throughout Euroasia and Africa, the numbers of rhinoceros have dropped dramatically due to habitat loss and poaching.


There are three Asian species of rhinos – Sumatran, Javan (critically endangered) and Indian (vulnerable). Southern white rhino were nearly extinct in the early 1900s but are now a real conservation success story. From less than 100 animals they now number over 20,000 in the wild in protected areas and private game reserves. After 121 years of successful protection and management they are no longer on the endangered species list and are now classified as 'near threatened' in the wild.


In contrast the Northern White Rhino subspecies is nearly extinct in the wild due to hunting for meat and poaching for its valuable horn.

Zoos like us play their part by showcasing animals as ambassadors for wild populations and conservation projects, as well as providing genetically sound reserve populations.


Hamilton’s white rhino breeding programme has been exceptionally successful with seven rhinos born at the zoo. They include:


Meet our rhinos up close with a Face2Face encounter. Learn about their personalities, lives here at Hamilton Zoo and conservation issues in the wild. 10% of every encounter fee goes directly to the Hamilton Zoo Conservation Fund who support the work of the Save the Rhino International.