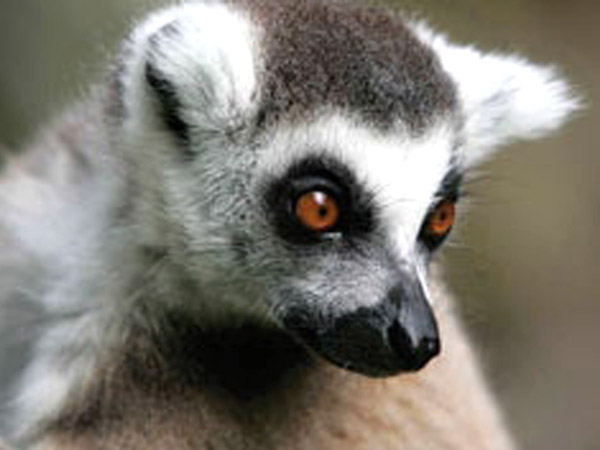 4 ½ months, usually one offspring born (although twins are not uncommon)

Potential predators include raptors, snakes and introduced dogs and cats

Lemurs are only found on the island of Madagascar. The ring-tailed lemur is the most terrestrial (ground dwelling) of all the lemurs, and is easily recognisable by its black and white striped tail.


They are very social and are usually seen in groups of 12-20 individuals. The females are dominant within these groups, winning all disputes with males.


The groups are very territorial, patrolling their home range on foot. Both males and females mark their territory by rubbing their scent on trees to warn others to keep out. The males often engage in stink fights. They rub scent from their wrist glands onto their tails, then stand face to face with their opponent, waving their tails like black and white flags.


Grooming is an important activity used to reinforce social bonds. Ring-tailed lemurs sit on their hunches to eat, gripping food with their hands (they have opposable thumbs, nails and palms just like we do) and tipping their heads back so that the juices of the fruits run into their mouth and not down their fur!


The rainforests of Madagascar are being cut down to make way for agriculture, timber and housing. This reduces the amount of suitable habitat available for the lemurs. They are also hunted and kept as pets.


Get up close to our ring-tailed lemurs with a Face2Face or Eye2Eye encounter.

Our ring-tailed lemur group is a firm favourite of our visitors. We have 15 ring-tailed lemurs here at the Zoo, five males and 10 females. They share the enclosure with the two black and white ruffed lemurs males Mikaly and Ankoto.