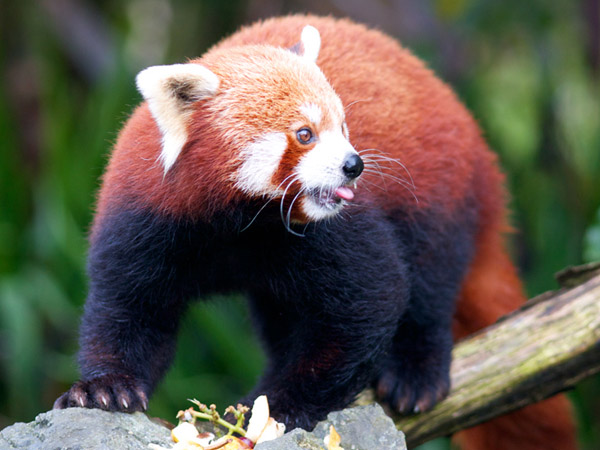 Endemic to the Himalayas, ranging from Nepal in the west to China in the east

Looking more like a racoon than a giant panda, the red panda has striking chestnut fur, bellies and limbs are black, a bushy, striped tail and a white face. They are a lot smaller than giant pandas, only reaching 50-60cm in body length and weighing 3-5kg.


Red pandas are crepuscular and are most active at dawn and dusk. They are sedentary during the day, resting in the tree branches and hollows, and search for food at night, moving along the ground or through the trees with speed and agility. The pads of their feet are covered in hair to prevent them slipping and they can jump up to 1.5m from branch to branch.


Its feet resemble bear paws, except that the forepaw have a ‘thumb’ and the tracks they leave on mud or snow look as though they have six toes on each front foot. The ‘thumb’ is actually an extension to the bone on the inside wrist (sesamoid bone) which helps ‘hold’ the bamboo poles when the red panda is eating.

Red pandas are normally solitary, only coming together at the beginning of the breeding season. The young are born in a hollow tree, fully furred but blind and helpless. They generally stay with their mother until the following breeding season. They are territorial, marking the boundaries with scent, using urine and substances secreted from their footpads.

They are increasingly threatened by habitat loss and hunting by locals for their pelts to make warm caps and tail hair for dusters.

We have three red panda at Hamilton Zoo. Tayla and Chito and their daughter Jamuna. The baby-making years are now over for Tayla and Chito but the Hamilton Zoo's breeding programme has been a huge success. Dad Chito arrived here from Auckland Zoo in 2006 and mum Tayla arrived from Canberra in 2010. Since being paired, the two have produced eight offspring, who are now beginning to breed themselves.

• Male Ketu, born in 2011, went to Rosamond Gifford Zoo in Syracuse, New York, and fathered sons Pumori and Rohan in 2015.
• Males Karma, Nima, and Dawa were born in 2012. Nima and Dawa went to National Zoo in Canberra, and Karma went to Singapore Zoo.
• Females Khusi and Khela were born in 2014. Khela is now at Auckland Zoo and Khusi is now at Wellington Zoo.
• Male Tenzing and female Jamuna were born in January 2015. Tenzing was transferred to Tasmania Zoo in March 2019 and sister Jumuna remains with her parents Tayla and Chito at Hamilton Zoo.