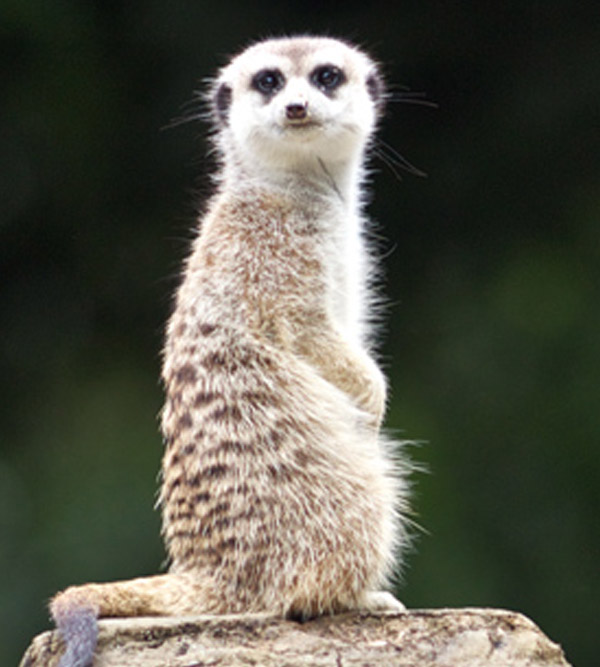 The Kalahari Desert in Botswana and southern Africa

Mainly insects, spiders and snails, but may include rodents, lizards, ground-nesting birds and their eggs, and even scorpions and snakes

Eleven weeks, up to five offspring per litter

Birds of prey such as hawks and eagles, jackals

Meerkats are highly sociable, and live in colonies of 24-30 in extensive networks of underground tunnels and ‘rooms’. These cool and shady burrows offer some protection from predators and from the harsh African sun. The dark circles around the eyes act as naturally sunglasses.


Groups spend their day foraging and napping, with one or two individuals on sentry duty. They warn with a variety of calls of imminent danger, especially from the skies. Teamwork and cooperation help to ensure their survival, and all meerkats in a group seem to have clearly defined roles.


Meerkat groups (known as ‘mobs’ or ‘gangs’) fiercely defend their home territories against invasion by other gangs. Meerkats will try to discourage rival gangs or predators by digging frantically to create clouds of dust.


Meerkats have natural immunity to scorpion and snake venom, and are well-known for their upright and intensely alert posture when scanning their surroundings.


Meerkat kittens' eyes are ears are closed until about 10 days old. They emerge from the burrow at 2-3 weeks and at four weeks they start to go on foraging trips with the group and start to resemble the adult at two months old. They are weaned by 9 weeks old.

Five meerkats make up the meerkat mob at Hamilton Zoo. There are three males and two females.