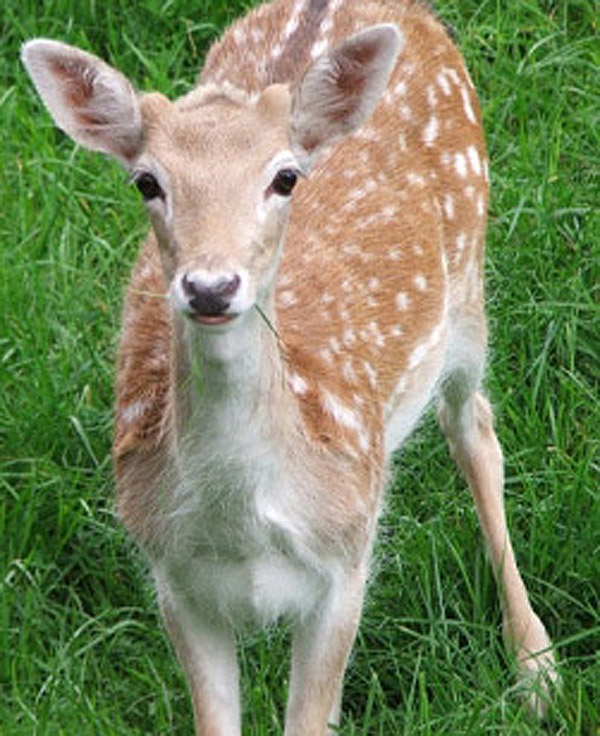 Originally from the Mediterranean region of southern Europe and south-west Asia, now widely introduced elsewhere. The first fallow deer in New Zealand came from England, and were liberated in 1864 a few miles from Nelson.

As deer are grazers their main diet is grass, but they will also eat fresh shots on plants and trees.

In New Zealand, humans. In other places, wolf, lynx and bear (all greatly reduced in range due to human predation)

This deer species was an important food source for European hunters 10,000 years ago. Spread across Europe by the Romans and into the United Kingdom by the Normans – this has long been a popular game animal. When introduced to countries such as New Zealand, where it has no predators except humans, it can become a pest species – eating native plants and competing with stock.

Males have striking palmate antlers that can measure up to 70cm in height. They tend to live in separate herds from the does. During breeding season or ‘rut’ buck are territorial, protecting small range and harem, vocalising often. Display sites are established by males scraping at and urinating on the ground. A 'lek' is a group of

displaying males. Females visit the lek during the rut to find a mate.

Colour of adults include black, red and white variants. Fawns run within an hour of birth, they are also able to jump well when only a few hours old. Adults under pressure will clear a 7-foot obstacle with ease. Fallow deer have good scenting ability, hearing and eyesight, and a distinctive stilted gait. Deer are ruminants, meaning they chew the cud.

We have a herd of fallow deer who live with the bison and turkeys down near the savannah.