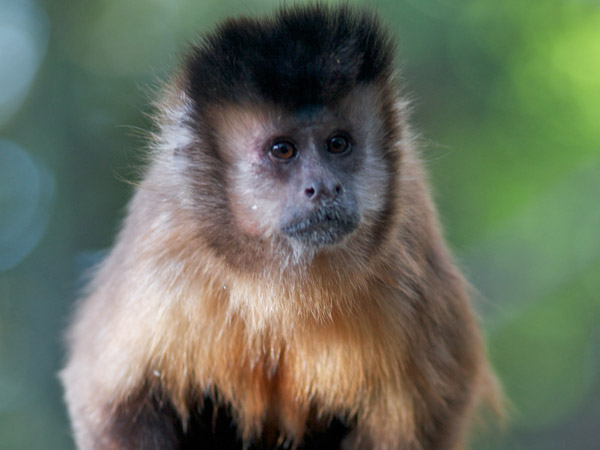 They are omnivores, eating not only fruits, nuts, seeds and buds, but also insects, spiders, bird eggs and small vertebrates. Capuchins living near water will also eat shells and crabs by cracking their shells with stones

45 years in captivity, expectancy is only 15-20 years in the wild

The capuchin monkey’s black or brown cap of hair and general colouration resembles the hood and robe of a capuchin monk, leading explorers in the 15th century to name the monkeys after the monks.

They have a supple and slender body with thin limbs. The long hairy tail is partly prehensile, it serves as an anchor or prop when capuchins travel through the trees.

Like most monkeys, capuchins are diurnal and arboreal. Apart from a midday nap, they spend their entire day searching for food, and sleep in the trees at night. They are adaptable to many kinds of habitat and also territorial, marking the centre of their territory with urine and defending it against intruders.

A single dominant male has the right to mate with all the females in his group. Male juveniles become fully mature in eight years, females in four years.

While the capuchin monkey is widespread and there are currently no major threats resulting in a significant overall population decline, they are still threatened by hunting pressure and by habitat loss and fragmentation. Capture of monkeys for pet trade has increased and could currently be one of the most serious threats.