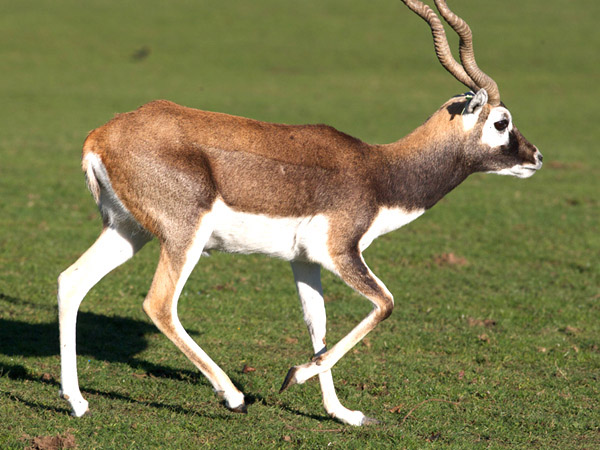 Mainly grass, but they also browser on herbs, fruits, leaves and flowers

After 5 months, usually one offspring born

Male and female are born the same colour, but the male darkens over the back as he matures and only males have the distinctive spiral horns.

Blackbucks live in herds ranging from 5-50 individuals. Outside the breeding season they stay in mixed groups but in the breeding season, the males either form bachelor groups or defend territories. The females then wander from one male's territory to another. The males mark their territory by rubbing on small twigs and branches using glands below their eyes, or by leaving piles of dung and urine.

With a stride length up to 6m and able to leap 2m, these antelope can reach speeds of 90km/hr, making them among the fastest animals.

Once the most widespread large animal in India; the population estimate 100 years ago at 4 million, is now only 10,000! They are threatened by excessive hunting and loss of habitat for agricultural development. Introduced into the United States and Argentina for antelope hunts, numbers are stable, but they are still hunted for sport, meat and skin.

We have a herd of blackbuck living in our savannah area. The number fluctuates as calves are born and older animals die. At the moment, our oldest blackbuck is Josh who is six years old and is named after one of our keepers.