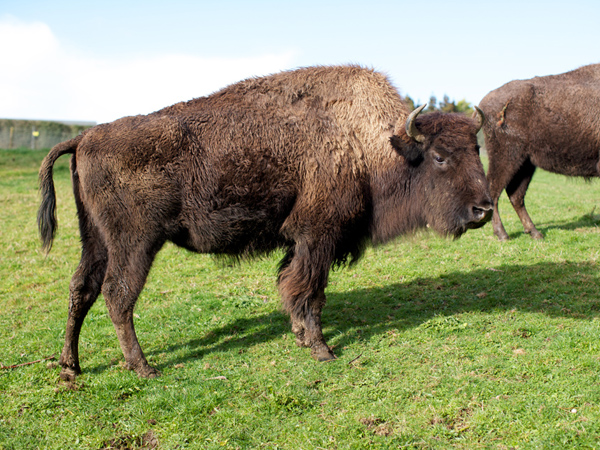 Primarily grasses, but also leaves, twigs and bark from a variety of trees and bushes. They need to drink daily and will eat snow when water is covered with ice.

Wolves and mountain lions may attack old or ailing bison, but they have few attackers due to their size

Bison is a Greek word meaning ox-like animal. American bison have a massive head and forequarters covered with long, dark brown woolly hair. Some stand six feet at the shoulder and can weigh up to 1,000kg! They have a highly developed sense of smell, good hearing and will charge when cornered. Bulls can run up to 30miles p/h.

In the 1820s there were approximately 60 million bison in North America. Slaughtered for their hides, for sport and for political expediency, bison numbers had fallen to less than 1,000 by 1895. Numbers have since rebounded.

Bison are nomadic grazers, found in groups of 20 to 50. Grazing mostly in the morning and evening, they spend much of the day resting and grooming. Grooming involves actions such as scrubbing the head, neck and sides on trees, branches and tree trunks. They also like to wallow in dust or mud.

Living in a hierarchical group led by a dominant female, herds generally consist of females, juvenile males and a few older males. As the seasonal rut approaches, more males may join the herd to try for breeding opportunities.

There are nine American Plains Bison at Hamilton Zoo, five females, three males and one calf of undetermined gender.