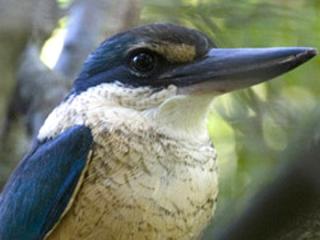 Widespread throughout New Zealand and Australia

A wide range of habitats close to water; common in estuaries, mangroves, along rivers.

Breeding is September to March. Usually both the male and female dig a tunnel with their beaks in a river bank or road cutting to make a nest or may use a natural hole in a tree or rotting stump. 4-7 eggs are laid daily and the female does most of the incubating and they hatch at around 18 days. The female feeds the chicks at 10-30 minute intervals, gradually increasing the size of the food as they grow. 2-3 chicks normally survive and they leave their nest at about 24 days.

These predators perch above water and dart down to catch prey, either snatching it from the surface or diving in after it and using their wings to swim up again. Prey is also taken from land.

Larger prey is battered against the bird's perch before being swallowed whole. Indigestible parts are regurgitated later as pellets.