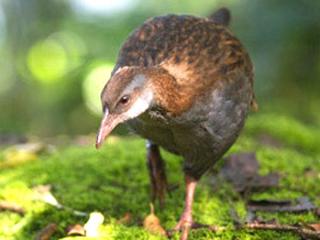 Once widespread, the North Island Weka are now found on the mainland in the hills between Matawai and Opotiki, where a few thousand survive. Since 2000, weka have been released near Russell, in the Whirinaki Forest, and there is a small population on the margins of the Hauraki Gulf near Auckland. A substantial portion of the population is on Kawau Island. Several other offshore island populations have also been established and they are also on Mokoia Island in Lake Rotorua.

Mainly fruits and invertebrates. Occasionally they eat chitons and other rocky coast invertebrates, lizards, rodents, food scrapes, carrion and the eggs and young of other nesting birds.

Breeding is mainly between September and April and they nest hidden in vegetation or logs or other shelter, made of coarse grass and lined with soft vegetation, wool, feathers, hair or leaves. They lay 3-4 eggs incubated for 25-27 days. Chicks stay close to the nest for the first 2-4 days.

Endemic. North Island Weka are fully protected, as are the Stewart Island weka and Western weka. However Buff weka (Chatham Islands) are not protected.

The weka is a large brown flightless bird with a famously feisty and curious personality. Their colouring is excellent camouflage for a ground dwelling bird. Its best known call is a repetitive, loud ‘coo-et’ that is usually heard in the early evening and at dusk.

They walk with a deliberate stride, tail-flicking and are also a fast runner with neck held outstretched.

Weka have a remarkable homing instincts which makes relocating difficult.

Head to the Weka Walk and you may come across our two North Island Weka. Both are males, the oldest hatched 3 December 2003 and the younger January 2011.