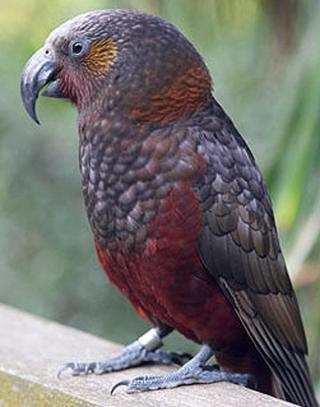 Scattered populations throughout the North Island

Breeding is from September to March and they nest in hollow trees preferably on warm, north-facing slopes lined with wood dust and wood chips. They lay up to five eggs incubated for around 35 days and chicks fledge by 9-12 weeks.

The kaka is a large parrot belonging to the family that includes the cheeky kea and the extinct Norfolk Island kaka.

The birds are mainly diurnal but are active at night during fine weather or a full moon.

The kaka has greatly declined, in part from habitat loss, and in part because of introduced wasps, possums and bees, which compete with the kaka for the honeydew excreted by scale insects.