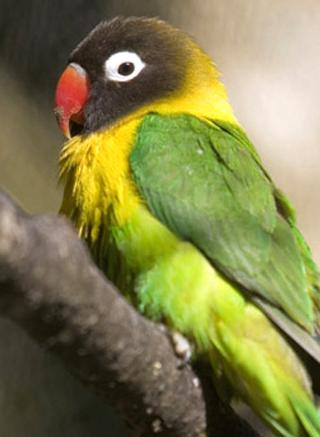 Masked Lovebirds may produce several egg clutches within a single year. They nest in hollow trees and usually lay 4-5 eggs in a clutch incubated for about 23 days. They fledge about 42 days after hatching.

These small parrots are prey for a wide range of carnivores, including birds of prey

Social, loud and active, lovebirds are popular pets and some have even learned how to mimic human speech.

The constant demand on parrot species to supply the pet trade is a real threat to their survival. The masked lovebird was discovered by Europeans in the late-1800s and quickly became a favourite addition to aviaries world-wide.

The translocation of birds spreads disease, and for this reason there are many regulations to follow when importing and exporting them. The introduction of a parrot disease to New Zealand could mean the extinction of native birds such as kakapo, kaka, kea and kakariki.