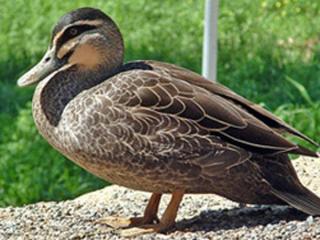 Breeding is September to December and they nest on the ground in long vegetation or a tree hollow. Grey Duck lay 4-9 eggs at the rate of one a day and packed in down to retain warmth during the females two brief daily absences. The eggs are incubated for about 26 days. After five days the male leaves to re-mate. Ducklings fledge at 8-10 weeks.

The Grey Duck is similar to a female mallard ducks in appearance, and most birds now show signs of hybridisation with mallards.

Grey ducks are usually found in pairs. They tend to stay in or near rushes at the edge of ponds and lakes and like other Anas species, feed by upending.

Ducklings swim soon after the last one hatches and dries out. They rarely spend more than an hour on the water at a time, with the female brooding them after each swim to restore body heat.

Until about 1960 grey ducks made up 95% of New Zealand’s dabbling duck population, but now are estimated to number only 500,000 compared with 5 million mallards!