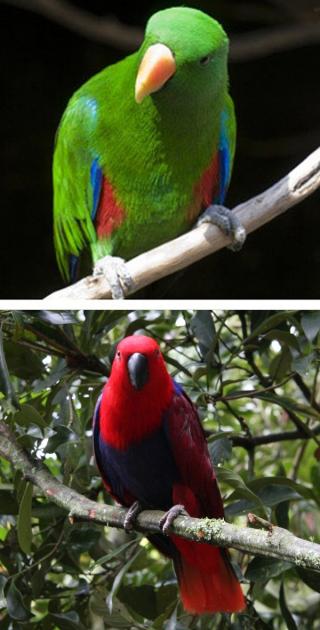 Rainforest canopies and a variety of timbered habitats

Breeding is July to February. They nest in wood chip lined hollows in emergent trees and lay up to two eggs incubated by the female for 20 days. One or more males (any of whom may be the father of the chicks) feed the female and chicks. Fledglings develop their colour contrast coloration at about 28 days old.

Least concern and generally common, scarce only in areas where they are captured for the live bird trade.

Due to the extreme sexual dimorphism (colour contrast) between male and female, they were once thought to be two different species. Male are predominantly emerald green with red feathers from sides to underwing, the females bright red head and part of body purple.

Usually found high in the canopy, they will congregate in large groups for roosting but generally feed by themselves or very small groups. Grown young from previous breeding seasons may help care for nestlings.