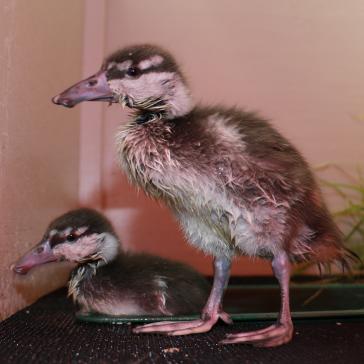 Forested mountains of the North and South Islands

Breeding is August to November and they nest in hollow logs, tree trunks, vegetation and other shelter close to stream edges. Whio lay 4-9 eggs, incubated for 31-32 days. Whio are attentive parents, the female feeds close to the chicks while the male keeps constant guard. As many ducklings are swept away by the water or killed by introduced predators, the mortality rate is high. Two surviving chicks are regarded as a successful breeding season.

Endangered - survival depends on the protection of habitats

An endemic species (found only in New Zealand). Once widespread and now restricted due to changes in their environment, e.g. dams, farming, forestry, erosion resulting in increased sedimentation, introduced predators and species in competition (such as trout).

Male and female are similar in appearance. The general body colour is slate blue-grey; as their colour resembles a river boulder Whio are very well camouflaged.

Each sex has a range of calls, the most notable being the males' 'fee-or' (hence the Maori name).

Active at dawn and dusk, they are specialised feeders, relying on fast-flowing fresh water – ‘white water’. Ducklings hatch with large flippers, ready to paddle in the turbulent water and learn to hunt.

Territory is around 1km of waterway, which birds will fight to protect, even from fledged young. Whio tend to swim away from danger rather than fly.