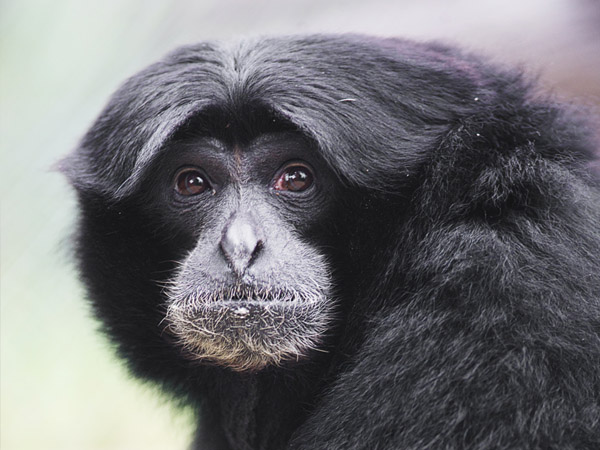 One offspring after a 235 day gestation period.

The siamang is the largest of the gibbon family and has an inflatable throat sac, allowing them to make loud resonating calls or songs. They sing for about 15 minutes several times a day. These calls are thought to aid bonding of pairs as well as protecting territory, and can be heard from up to 5km away.

Of all the gibbons, siamang are considered the best at walking upright, holding their long arms above their heads for balance. Most of a siamang’s life is spent in the tree canopy where their long arms allow them to swing from branch to branch. They use their long fingers to hook over the branches as they swing, rather than grasping.


Male and female are similar in size, reaching 1m in height and weighing up to 23kg. Siamang adults pair for life. They live in small family groups of parent and immature offspring. Infants are born hairless but are soon covered with soft, dark hair.


Siamangs are diurnal (active during the day), with family members remaining close together while they forage for food. Unlike chimpanzees which build sleeping nests or platforms, siamangs sleep sitting upright on a branch high in the forest canopy, with arms folded and head between their knees.


As a frugivorous animal, the siamang disperses seeds through defecation as it travels across its territory. This plays an important role in supporting forest.


This species is threatened by hunting for pet trade and continued rates of habitat loss (mainly as a result of expanding agriculture such as coffee plantations, and road building).

You will often find Itam (Eetam) and Kasih sharing the spacious purpose built siamang enclosure. This allows them to climb as high as they wish in the trees and exhibit their full range of natural behaviours. Visitors can view them from a boardwalk over a lake.

Get up close to our siamang gibbons with a Face2Face or Eye2Eye encounter.