Waiwhakareke opens to the public

Hamilton’s “urban island” long-term ecological restoration project, Waiwhakareke, will be open to the public from this Saturday, 16 November.

Waiwhakareke is owned and managed by Hamilton City Council, and its transformation is the result of more than a decade of planting and ecological restoration work by volunteers and key stakeholder organisations including University of Waikato, Wintec, Tui 2000, Waiwhakareke Advisory Group, Friends of Waiwhakareke and Waikato Regional Council.

In recent months, the Council completed the 10-Year Plan project of basic development at Waiwhakareke, including the development of a loop track, viewing platforms, and a public toilet. Interpretive information panels have also been added to the park’s barn, and they outline the history of the site and the flora and fauna species found there.

Access to Waiwhakareke has previously been by arrangement only, and Saturday’s event also marks the start of a new era – with the park open to the public.

Maria Barrie, Hamilton City Council’s Parks and Recreation Manager, says Saturday’s opening event commences at 1pm, and runs until 3pm. Visitors will be able to stroll through Waiwhakareke to take in the new assets and the result of more than a decade of planting, and there will also be a scavenger hunt and storytelling.  Some of the volunteers will be available to guide and answer any questions.

It is a chance for the public to see the developments first-hand, and explore the park and its plantings – much of which is undertaken during the Arbor Day mass community planting, held at Waiwhakareke every year in late May or early June.

“We’ve be fortunate to have some incredible support on this project,” Ms Barrie says. “Our stakeholders and volunteers have been huge contributors to the planting and developments at Waiwhakareke, and it’s great to be able to celebrate this milestone with them, and the wider community.” 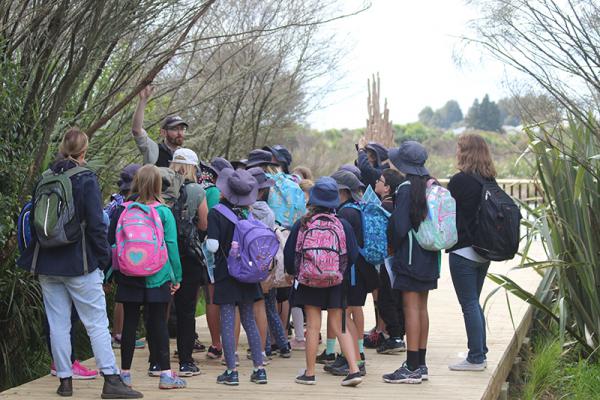