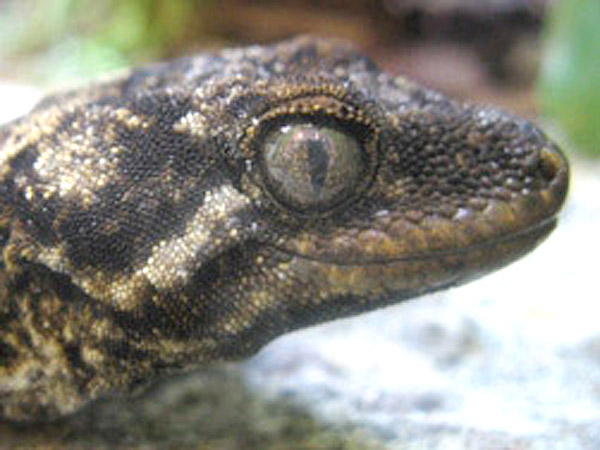 Found mainly on small islands in Cook Strait and the Hauraki Gulf.

They feed mainly on insects. In Hamilton Zoo they are fed insects and fruit puree

These lizards give birth to live youngs, usually twins. Keepers must be vigilant and remove newborns as the parents may eat them.

Tuatara and birds of prey, as well as the introduction of cats, dogs, ferrets, stoats, possums and rats

New Zealand’s largest geckos, growing up to 32cm long. They are nocturnal, sheltering during the day and hunting at night. Their senses of smell and hearing are better than their sight.

Geckos have a covering of scales, which tend to fit rather loosely. Sloughing ('sluffing') is the process of moulting old scales, usually in one complete layer. New scales will have grown under the old scales. Geckos are generally a dull brown or olive green, flecked with darker spots and streaks. This disruptive camouflage allows it to blend in extremely well!

Lizards are important pollinators of plants as they feed. They may also spread seeds in their droppings.

Fossil evidence suggests that they were once much more widespread, but predation by introduced mammals has ensured its range is now much reduced.