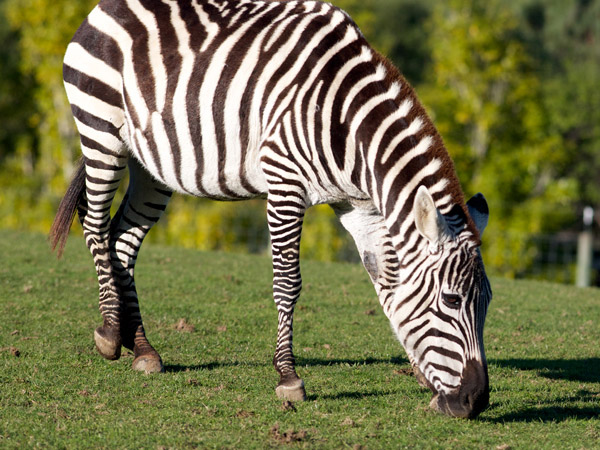 A wide range of grasses. They also browse on leaves. Zebra are grazers, eating low-growing plants on the ground.

13 months, and they give birth to a single foal

Up to 20 years in captivity, a little less in the wild

Zebras are best known for their distinctive black and white stripes. Zebras seem to recognise individuals by sight (no two stripe patterns are the same), smell and sound. Zebras communicate with each other in high pitched barks and whinnies.
Like most members of the horse family, zebras are highly social. Plains zebras live in groups, known as 'harems', consisting of one stallion with up to six mares and their foals. Bachelor males either live alone or with groups of other bachelors until they are old enough to challenge a breeding stallion.
Like horses, zebras walk, trot, canter and gallop. They are generally slower than horses, but their great stamina helps them outpace predators.
Unlike the Grevy's zebra (endangered) and the Mountain zebra (vulnerable), the Plains zebras have a healthy population. One subspecies however, the quagga, is now extinct. Competition with domestic grazing animals, habitat destruction, over-hunting and human disturbance at critical water holes contribute to the zebras decline.

You'll find our zebra family at Hamilton Zoo in the savannah. We have six zebra in total, one male and five females.


Our stallion Malawi arrived from Canberra's National Zoo and Aquarium in October 2014 to take over from the previous breeding stallion Bwana. Bawana was transferred to Taronga Western Plains Zoo in Dubbo, New South Wales.