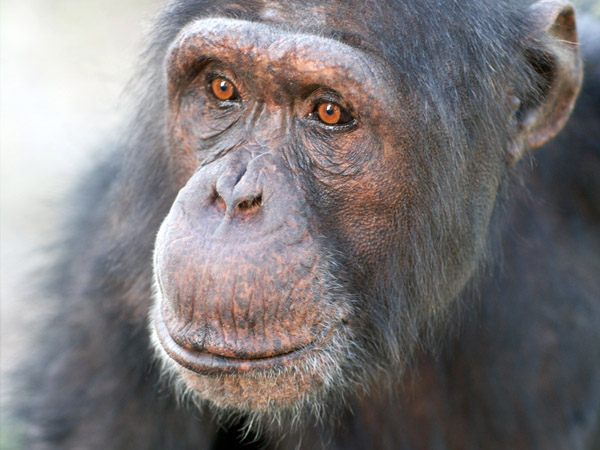 Guinea and Ghana in West Africa, to Tanzania in the east

Rarely live past the age of 40 in the wild, but have been known to reach the age of more than 60 in captivity

Chimpanzees are one of the great apes and are one of our closest living relatives in the animal kingdom. They are very intelligent primates and have complex social behaviour. Males are larger than the female and also have larger canine teeth. They are mainly black in colour and like all apes, do not have a tail. Like humans, all chimps have different facial features and this can be a way of identifying individuals.

On the ground, chimpanzees usually walk on all fours using their knuckles for support with their hands clenched, a form of locomotion called knuckle-walking.

Chimpanzees live in groups, which can vary in size from 15-100. The group usually breaks up into smaller parties of 3-6 individuals, which go off to feed on their own. The male chimpanzees always stay in the group they were born into, whereas the females will move onto another group.

Tool use in chimpanzees is common; they learn how to do this from their mothers. Common tools include sticks to fish out termites from their nests, and leaves to collect water from pools.

All great ape species except humans are seriously threatened by habitat loss, climate change, infectious disease and illegal hunting for both meat and the live pet trade. These factors have combined to push these species to the brink of extinction. If we don’t act soon, we will lose our closest relatives forever!

The troop at Hamilton Zoo is made up of six chimpanzees. We have two males, Lucifer and Luka and four females, Sally, Lucy, Sanda and Sanda and Luka's baby girl Chiku. Chiku means'talker' or 'one who chatters' and was the winning name out of over 600 suggestions from the public.

Luka is the boss of the troop, Lucifer is his older brother and Lucy is their mother.