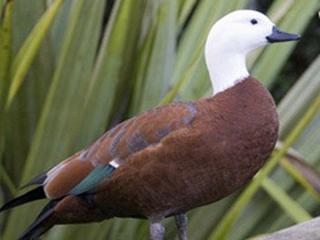 Endemic to New Zealand and widespread in all but a few areas.

Breeding is August to January and they nest usually in depressions in the ground hidden under shelter and well-lined down. Average clutch size of 9 eggs incubated for 30-32 days. Parents guard their offspring until they fledge at 56 days.

Hunters in the duck-shooting season

Both sexes are a similar size. Both have striking plumage, the male a black head and black-barred body, the female a white head and chestnut body.

They live in pairs and often form lifelong bonds, but another partner is found if one bird dies. They are territorial apart from two months spent at a communal site during the annual moult, when they are flightless.