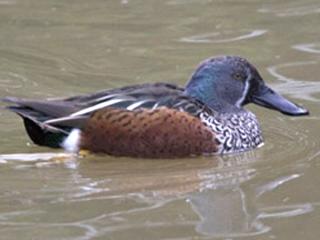 Breeding is October to January. They nest in open grassy areas close to water but safe from flooding. They lay up to 11 eggs incubated for around 25 years. Creches or up to 50 young birds may be left unattended and they fledge at 8-10 weeks.

The shoveler duck is rarely seen away from water or above 350 metres. It is reported to be the fastest flying waterfowl, and their swift flight aids survival.

The shoveler swims with its bill submerged, sieving food from the water surface and even from mud. As soon as a chick hatches, the broad bill is the predominant feature.

The shoveler is one of the few native species not protected, with about 30,000 birds shot each year during the duck-hunting season. It is the first New Zealand duck to take refuge from hunters on open ocean.