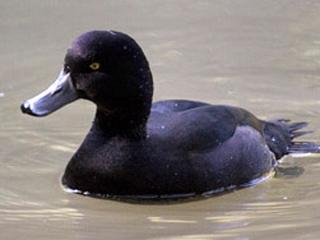 Now restricted to the larger, deeper lakes including 'hydro' lakes.

Breeding is October to February and they nest in dense cover beside water. The nest is made of reeds or grass, the bowl shaped nests are lined with down. Scaup build their nests close to each other, resembling a loose colony. They lay 5 - 8 eggs incubated for 28-30 days. Both parents care for and guard ducklings until they're fledged.

The scaup is New Zealand's only true diving duck. It can dive more than 2 metres for its food using its feet to swim down. Although most dives last 15-20 seconds, scaup can stay down for over half a minute.

Pairs form for one season only after elaborate courtship displays. They are highly social and show little aggression.

Widespread until the late 1800s, numbers decreased dramatically due to hunting, competition from introduced ducks and an increase in land being cleared for agriculture.