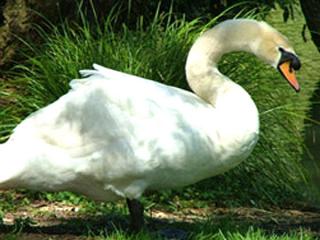 Vegetation, leaves and stems of aquatic plants, as well as frogs, worms and fish occasionally.

In New Zealand, breeding is in September. They nest in large mats of raupo, as far as they can be from other nests and above water level, lined with down. They lay 4-11 pale green-white eggs incubated for five weeks. They are led to water within a day of hatching, fledge in five months.

No natural predators apart from man

The mute swan is a very large white water bird. It is one of the heaviest flying birds, with males averaging 12kg and females about 9kg. It has a wingspan to 2.5m. As the name ‘mute’ implies it is less vocal than other swan species. Posturing is a common form of communication.

Pairs are generally monogamous and strongly territorial, fiercely defending feeding and nesting areas. Chicks often ride on their parents' backs or under their wings. When swimming the bill is held pointing downward.

Even domesticated swans are dangerous; their wings are powerful and can inflict serious injuries to much larger animals, including humans.

The most familiar sound associated with the mute swan is the vibrant throbbing of its wings in flight, which can be heard from a range of 1-2km.