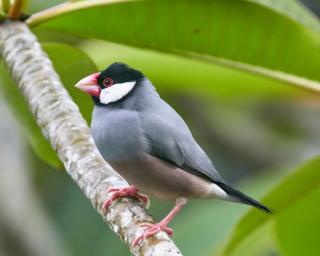 Found throughout New Zealand and in parts of Australia and New Caledonia.

Breeding is after the rainy season from November to March, when food is abundant. Their nest is a loosely-built structure of dried grass or other plant material. Nest sites vary greatly - from treetops to the eaves of buildings to crevices in coastal cliffs. Clutch size is usually 4-8 eggs. Both parents share incubation during the day, only the hen incubating overnight. Chicks hatch after 14 days and at 3-4 weeks old, the chicks fledge and are ready to leave the nest.

Capture for the international cage-bird trade, habitat loss and hunting.

The male and female are very similar in appearance, but a little more differentiated in the breeding season. Only the male performs a courtship display, including a song and simple dance. Life span in captivity is 9-11 years.

In their native range – Java, Bali and Sumatra – Java sparrows were once widespread and abundant, but a rapid and ongoing decline in numbers has been due primarily to the domestic and international cage-bird trade. Their habit of roosting tightly together made them an easy target for capture. As a significant agricultural pest (oryzivora means “rice eater”), the birds and their nests were also destroyed by rice farmers.

Conservation efforts are focusing on meeting market demand for cage-birds from captive breeding stock, promoting the restriction of trade in wild birds, and developing programmes to protect remaining populations.