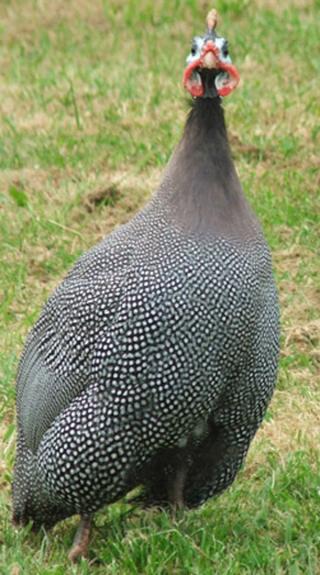 In New Zealand, breeding is October to January. They nest in a shallow scrape in the ground and normally lay 6-12 eggs incubated for 26-28 days. Females often share nest sites so may be multiple clutches in one nest. Chicks are cryptically coloured and rapid wing growth enables them to flutter onto low branches barely a week after hatching.

The name of the Helmeted Guineafowl comes from the bony horn-like helmet on the top of its head. It is a medium-sized bird with grey to black plumage and a bead-like design of closely set white dots. It has only a few feathers on its head, where the skin is red and bright blue.

There are four types of Helmeted Guineafowl found throughout Africa, each with a slightly different-shaped horn and coloration.

This is a gregarious species, forming flocks outside the breeding season typically of about 25 birds that also roost communally.

These birds are terrestrial and prone to run rather than fly when alarmed. They have a short-lived explosive flight and rely on gliding to cover extended distances. Helmeted Guineafowl are great runners and can walk 10km and more in a day. They make loud harsh calls when disturbed.