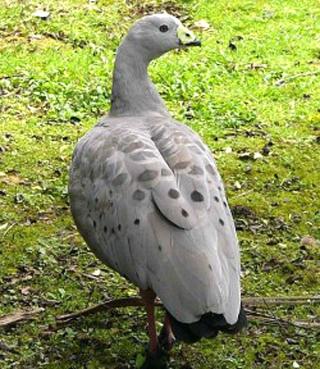 Islands off southern Australia, migrating to the mainland in summer.

Strictly a grazer of plants.

They nest in a mound of plant matter with a hollow, thickly lined with down and slightly elevated on, or beside, grass tussock. They lay four to five eggs incubated over 35 days. Chicks fledge at six weeks.

The Cape Barren goose was introduced to New Zealand during the 1900s, but the colonies died out in the 1940s. Recent birds are self-introduced and numbers are slowly recovering - estimated now at 6000 in the wild.

The call of the Cape Barren goose is a low grunt that sounds just like a pig! The male also produces a "honk" sound.

These geese can be very aggressive towards each other and humans in defence of their breeding territories.