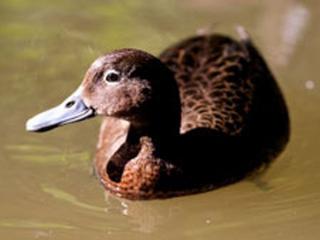 Breeding is July to December. However in certain circumstances, if the conditions are suitable, brown teal have been known to breed in every month of the year; truly unique. Their nest is bowl-shaped, lined with down, usually in vegetation close to the waters edge. They lay 5-6 creamy brown eggs incubated for 27-30 days. The male acts as an aggressive guard. Chicks fledge at 55 days.

Introduced mammals, harriers and pukeko; eels may eat the ducklings

This small slow-flying duck is also known as the pateke. Distinguishing features include its small size and general brown colouration with lighter chest.

Once recorded as being in all major swamplands, sadly wetland drainage, forest clearance and the introduction of predators have caused their decline. Two distinct flightless subspecies are found on Auckland and Campbell Islands. There are currently fewer than 2000 brown teal living in the wild in mainland New Zealand, making it our rarest waterfowl species.

The brown teal’s omnivorous diet, restricted annual range and mainly terrestrial lifestyle give it a unique ecological niche among waterfowl.