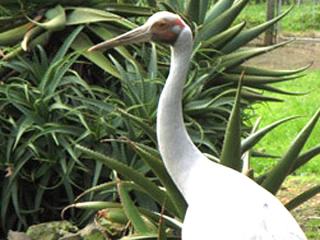 Breeding is September to December in the South, and February to May in then north. They nest is a large pile of vegetation on a mound surrounded by water or swamp. They usually lay two eggs, incubated for 30 days. Young can leave the nest within a day or two, have body features within four or five weeks, are fully feathered after three months and able to fly about two weeks after that.

One of the largest water birds in Australia, this is a very elegant animal. A large silver-grey crane up to 1.3m tall, weighing up to 7kg, and with a wingspan up to 2.4m. Brolga are well known for their ‘dance’ which may be to strengthen pair-bonds, courtship or to scare away predators.

Draining of wetlands to provide land for human use (agriculture, housing, etc) is causing a severe decline in wetlands animals and plants world-wide. In New Zealand there are several wetlands of international significance, which are protected by the RAMSAR Convention.

Wetlands are a natural part of our environment. Like huge sponges they absorb excess water and release it gradually, reducing flooding in nearby areas. Wetlands filter the water passing through them. They provide recreational opportunities such as fishing, hunting and boating. Humans need to share these important areas with the native plants and animals, including migratory birds, which rely on them for survival.