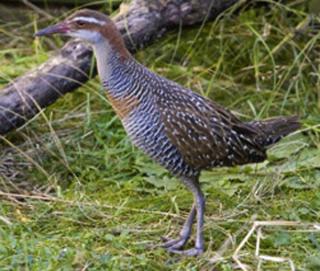 Mainly Northland to Bay of Plenty

Breeding is from August to March and their nest is made of matted layers of vegetation on the ground under cover. They have up to five buff-coloured eggs with purple, brown or grey spots, incubated for about 18 days. There are generally two broods each year, the second occurring when the chicks from the first are one month old and independent. Chicks fledge in 5-6 weeks.

Similar in size to a bantam hen, they are the largest of the swamp rails.

They are most often heard at dusk - a range of calls, described as 'creaking' and 'growling', near the nest. As they are presumed to be territorial, so calling may be a warning to other rails.

Banded rails walk with a deliberate stride and flick their tails. They are able to fly but prefer to run from danger, with neck outstretched parallel to the ground. Secretive and shy, they are rarely seen. They rely on camouflage and running speed for protection.