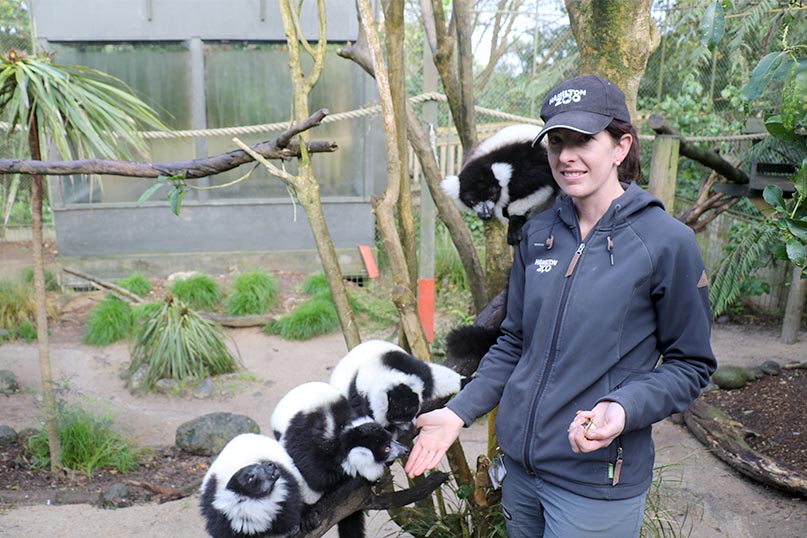 Louise has been a keeper at Hamilton Zoo for over ten years. She started out working with our hoof-stock, and is now the team leader of our Primate and Small Carnivores section. I had a bit of a chat with her about her life as a zookeeper.

Louise started out wanting to be an air hostess, but after a bit of travelling and working with horses in the UK, she returned to the Waikato (where she grew up) and studied Biology at Waikato Uni. That led her eventually to study Biology, or specifically the Bio-tech degree, which included a placement at the Hamilton Zoo. And she never really looked back.

Louise met her husband Aaron when he was working at Orana Wildlife Park in Christchurch, and she was involved in moving a zebra there and returning with two waterbuck. She described this as a “fateful trip” because it was a unique experience travelling with exotic animals (imagine taking a zebra on the ferry!), as well as being the reason she met the man who would become her husband. (Aaron is now here at Hamilton Zoo too and is our Ungulates and Large Carnivores team leader.)

Louise has a soft spot for giraffes, even though she no longer works with them as much, since she used her experience and knowledge of more conventional hooved animals (horses and cows) to help Jabari learn how to let keepers work on his hooves. The work she and the ungulates team did with Jabari became a conference paper!

Nowadays she spends a lot of time with Chiku, our three-year-old chimpanzee, and she says one of the most rewarding things is seeing Chiku really understand and learn new things.

Here are some of her answers to my questions:

WHAT'S THE BEST PART OF YOUR JOB?

When I get some time to actually spend with the animals, and I really realise what I’m working with. Suddenly, you have that moment where you're like 'Oh my goodness, I'm working with something that you'd never get to see up close.' And you have that feeling again - like when you're a kid and you go into a zoo and you think, 'Whoa! That's amazing! It's a rhino! How cool! Wish I could see it up close!'
And I get to work with them, and sometimes I take it for granted, but then sometimes I look up and I go 'Whoa! It's a rhino!'.
These are the things that used to absolutely blow my mind when I was a kid. And I just wanted to get close to them and get to know them. And there it is, you've got a lemur hanging out beside you when you're cleaning.

WHO IS YOUR FAVOURITE ANIMAL?

That’s impossible! I've got a few favourite individuals. In the chimp troop, I've got two favourites, Sally and Chiku. Chiku's my one-on-one for training, and then everybody loves Sally. With the giraffe, I love Jabari because I worked closely with him with the leg lifts. Black and white ruffed lemurs, Mikaly, a hundred percent Mikaly, because I've worked with him since I was a new keeper. He's just super sweet.

IF YOU HAD TO GET A TATOO, WHICH WOULD YOU CHOOSE?

If I was going to get a tattoo of an animal, of a zoo animal, it'd probably be a giraffe, because a lemur wouldn't look so good as a tattoo. If I had to get a primate one it'd be a black and white ruffed lemur.

DO YOU HAVE A FAVOURITE ANIMAL STORY?

I helped with the rearing of Ubuntu the rhino. It was a difficult birth. Kito had him and he was born blind and she was a first-time mum so she didn't know how to feed him. I was quite a new keeper but I got to be a part of milking her, to supplement feed Ubuntu. You have to milk them by hand, and then get the colostrum out so that you can bottle feed the baby. So that was really cool. And the coolest thing about that is the fact that eventually after maybe four or five days we managed to get Bunty feeding off Kito, and then we could just leave them to it. It was really rewarding.

IF YOU COULD GET PEOPLE TO REALLY PAY ATTENTION TO ONE CONSERVATION MESSAGE, WHAT WOULD IT BE?

It'd be buying sustainable palm oil. Or just not investing in palm oil full stop. So many people don't know about that and they don't even realise.